Over the years, I've posted now and then about how young people, especially high schoolers and college students, can take control of their finances. It seems as though every day there is some kind of story, either in the newspaper or on TV, about the ever-rising cost of living and skyrocketing college costs. If you're over 50, you can certainly vouch for the fact that life is much harder to manage these days than it was a decade or more in the past. So, as parents, what should we be teaching our children about money?

I always chuckle when I think about what the mother of a good friend of mine used to say when we were in high school. My buddy and I were sitting around his house one lazy summer day trying to think of something to do, when suddenly we remembered that the latest "great" movie was showing downtown. Realizing that we had enough money to get into the movie but not enough gas in my buddy's car to get there, my buddy asked his mother for the needed fuel funds. "Oh, sure," she said politely, "I'll just go out in the backyard and pull some greenbacks off the money tree!" Needless to say, we got her point and altered our plans accordingly. 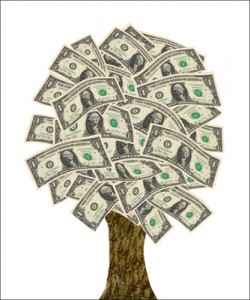 That rudimentary anecdote proffers an important point: How can young people gain the proper perspective about money--its importance and its relative scarcity (except in forests populated mainly by money trees :-))? Well, here are a few insights from Trevor Bolin, who grew up understanding what money means and how to develop financial smarts.

Trevor has quite a list of accomplishments. He owns three realty companies in British Columbia, including one in his hometown of Fort St. John, which was named the No. 1 RE/MAX small-density office in the world. He’s also chairman of Bolin & Co. International Training, which offers coaching and seminars for business people. He has served three terms on the Fort St. John City Council. As a teenager, Trevor Bolin was a drug-abusing high school dropout who weighed in at more than 300 pounds. He supplemented his meager income pumping gas by hauling possessions to the pawn shop, where he picked up just enough money for hot dogs and Kraft mac and cheese.

And he did it simply by coming up with a plan and putting the plan in motion.

“My life has nothing to do with luck, good or bad,” Bolin, 32, writes in his new book, Take Charge and Change Your Life Today ( www.bolininternational.com ). “It revolves around working hard, giving back as much as (if not more than) I get, accepting that attitude is everything, and being grateful for what I have.”

He wishes he had learned those lessons long before he became an unhappy teenager with a seemingly hopeless future.

While many parents teach their children the basics of fiscal responsibility by giving them an allowance, Bolin says his experience offers less obvious but equally important lessons. Children need to have a healthy attitude toward money, not only to avoid making choices that make them unhappy, but to allow them a life path that they control.

“I learned my lessons the hard way,” he says. “You can start now to make sure your children never reach the bottom that I hit.”

These are some places to start, he says:

• Avoid making negative comments about money: Sayings like “money is the root of all evil” and “a fool and his money are soon parted” are negative and therefore not helpful. Make a commitment, starting today, not to use those phrases. Imagine what a child believes about money if that’s what they hear all the time?

Money is a great thing -- when you know what to do with it and when you control it rather than allowing it to control you.

• Help children recognize the financial lessons they learn from experience: Say you warned your child he should set aside some of Grandma’s birthday money, but he spent it all on impulse. When he’s disappointed later because he can’t buy something he wants, remind him why he can’t. Tell him that feeling disappointed is a small price to pay for a valuable lesson. And won’t it be much easier if he learns the lesson after just one sad experience?

• Pay yourself first: If your child receives a weekly allowance, he or she should immediately put 10 to 15 percent into a savings account that won’t be touched. Or set a milestone for when money from the account can be used, such as the child’s 18th birthday. By then, she’ll be so accustomed to saving, she probably won’t tap the account even when she can.

• Help your child set goals: Setting financial goals, noting progress toward achieving them, and enjoying the satisfaction of crossing them off the list are fiscally sound lessons and a good way to nurture healthy attitudes in general. Your child might set goals for the month ($10 to go to the movies), goals for the year (save $200 for a Wii system) and goals for the future ($375 a year for the next eight years for a car when I’m 16.)

“Goals are the first step in achieving what you desire in this world,” Bolin says.

“You can create success in any aspect of life – not just money – as long as you’re putting a plan in motion.”

I have to wonder how much college loan debt could have been eliminated if the majority of today's recent college graduates had followed Bolin's simple guidelines. Discipline has never been the hallmark of the general American public. In any event, Mom and Dad, take a moment to think about what kind of message you may be sending to your youngsters. By the time they hit high school, it may be too late to reverse the negative momentum you and they have created by not having a plan. That's why your money tree will never have any blossoms.