Will Your Baby Boomerang?

When I graduated from college, I moved to another state. I was married and we had a new baby, our first. Life was scary then. The job market may not have been as depressed as it is now. I can't recall. However, for a young-20s-something, it took courage to pack up everything, rent a U-Haul, and establish residence in another state. We made that decision based entirely on the hopes of my new job, which would end up lasting less than half a year before we returned to our home town, not to either of our parents' homes.

We could have "boomeranged," as the common parlance goes these days, but I was perhaps too proud to accept the graciousness and hospitality of my parent ("parent" (singular), as it was back then because my father had passed away before I graduated, leaving my mother on her own). College graduates these days are facing a different world than I did back in the early Seventies. Things are shaky now. They were shaky back then, too, I guess, but the intensity of the shakiness wasn't as apparent, at least it seems that way to me now as I look back. 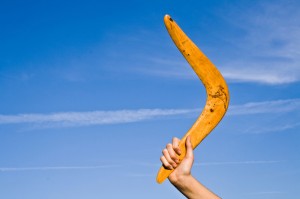 If you're a parent with a college upperclassman, you may have wondered what the future holds for your child after s/he graduates. According to an insightful article, though, there is no shame in boomeranging. Writer Amanda Abella makes some key points. Here are some excerpts.

Why It's Okay To Be a Boomerang Kid

There was a post that came out last week in The New York Times entitled In Defense of Boomerang Kids. It was rather refreshing considering Gen Y gets reamed by NYT every once in a while (anyone remember What Is It With 20-Somethings?), but boomerang kids still get a lot of flack in the press.

The truth is when I graduated from college I was broke. And I mean really broke. I had quit my job during my last semester because writing my thesis, my health issues at the time, and graduating became priority. Whatever money I had saved up before then was long gone before I graduated ...

... It's easy to get down in the dumps during this kind of situation. We were taught that after college we land a job and go out on our own. We were supposed to just keep going without looking back to embark on the rest of our lives. Obviously this isn't happening for most of us anymore.

... I for one would rather save up for a downpayment on property that would belong to me instead of helping someone else pay their mortgage with my rent check. Don't get me wrong, if there's a way I can do both I would gladly take it – but rent is more expensive than ever, and it's a buyer's market in real estate.

Sure, I could have moved out once I got a job,but I live in an expensive city and wouldn't have been able to put away as much money as I do now. Because I chose to continue living at home even after getting a job I can put money toward my IRA, invest, and save more money in high yield savings accounts. If I were on my own there's no way I'd be able to do that much.

Do I want to move out eventually? Of course! And sometimes I get the itch to move out as soon as possible. But honestly, I want to do it the smart way, with nice chunk of money in the bank, not because I'm in a hurry to be on my own again.

Complementing Amanda's admonitions are the many comments from this thread

on the College Confidential discussion forum. Here are a few:

- I'm a high school junior. I believes that it does make some sense financially. But it is not right for people who are more likely to go out into the world. However you can build stronger bonds with your family as you lead a social life (ignoring all those drama from the teens year). However sometime it is just not possible to manage.

- In the olden days (the real olden days) everyone lived with their parents and vice versa unless they were striking off across the frontier to stake a land claim in which case they probably would never see their families again. To think that just because the few generations before this one left home at 18 that this generation has to do the same to be successful is wooden headedness. It's a brand new world out there each and every day and conditions change. When we boomers were leaving home there was a wide generation gap (music, clothing, hair, values, civil rights, hawks vs. doves). Kids needed to leave home because home had an intolerable clash in values for many/most. It's just not the same today. You can't pack up your VW and buy gas at (25cents/gallon?) and rent an apartment with 10 other kids for just about nothing. It's just a very very different world. So to live at home and save up? Pay off college loans? Spend a few more years with your elderly - ish parents (my folks were 40 when I left...)...yeah. It's just different now.

- Having the chance to live at home after college is great. Especially during this incredibly tough financial time that we have been going through. I really don't see any shame in going back home if it is temporary and it is because you are working toward a better arraignment. I have heard about some kids finishing college and then going back home and doing nothing. that is such a huge mistake on the part of the parent. Letting your grown child sleep the day away without looking for a job is not helping them.

I really see nothing wrong with staying at home until getting married or buying a house. As long as everyone is getting along and everyone is working together. It is terrible when the grown kids go back home and then begin to resort to old habits that they had as kids. Expecting mom to cook and clean is not mature.

Paying a little rent after going back home is smart too. If the parents don't need the money they could put the cash into a savings for the kid. That could be a down payment on a house at some point.

- S1 came home for only a for only a few days after graduation last year. He planned his job and moved to D.C. and that was that. He leads an extremely busy life - working, grad school, the army reserves... so staying here in the 'burbs of NY was not an option. If it had been, though, he would certainly have been welcome to stay.

I think staying home for a while can be a good choice even if they can afford NOT to. I see no reason why they shouldn't as long as both parent and child are OK with it. My friend's son has lived at home - at their suggestion - since graduating, while working full time, making an excellent salary, and taking grad school classes at night. He will take care of his college loans well ahead of schedule, and has always been a big help around the house and they enjoy having him there. He is now getting a bit antsy, and within the next few months will move into the city with his friends, but not at anyone's goading.

- My stepdaughter moved back with us for a period after she graduated to gain experience before applying to graduate schools. Because she lived at home she was able to work in a colleagues lab as volunteer for a while instead of having to earn money to support herself. It paid off for her because she ended up being accepted to a program that provides good funding-something unlikely without the experience. In the end the free tuition and stipend for 4 years far more than made up for the brief time she lived with us. I am not sure she felt it was the easiest thing to do but I think she is glad she did it.

There are plenty more. Check 'em out.

So, be prepared, Mom and Dad. Your boomerang baby may be heading back your way after graduation. I suggest that you consider what your position will be if such an eventuality occurs. As the Boy Scouts advise: Be prepared.