Are we having fun yet? Look at the calendar. It's almost November 1. Anyone for Early Decision or Early Action? If so, the clock is running and you should now be doing your NFL-approved two-minute drill. Time to break out the antiperspirant, which brings us to, no doubt, to the biggest sweat-inducing part of college applications: those pesky essays.

Back in the day (don't you love it when I wax nostalgic? Don't answer that!), I recall the essay (note that I said, "the essay" not "the essays" [plural]) prompt asked "Why do you want to attend [here]?" Granted, that prompt, or some variant thereof, appears on most college applications today, but there is most always a fleet of other prompts to torture even the most gifted writers' imaginations and patience. Many rising high school seniors use the summer to ponder their essays and some are fooled into thinking that the Common Application's relatively light writing requirement is all they'll have to tackle (keeping the football metaphor). Then, some of those less-well-informed applicants stumble onto the dreaded Common App supplements from their candidate schools, which pile on, so to speak, with a few more perilous prompts. 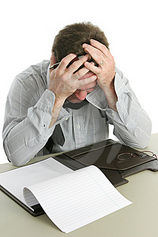 I've seen more than my share of mundane essay questions. Some are enough to put one into a coma. However, I happened onto a great article that rounded up 20 Strange College Application Essay Questions, where poster, "Mark," notes:

College application essays can be nerve-wracking affairs, but some schools (particularly the University of Chicago) try to ease the tension with lighthearted, creative and just plain odd questions. Depending on your personality, though, this sort of essay might make you even more stressed. Try practicing on these past examples, the oddest of the odd college application essay questions.

1. How do you feel about Wednesday? [University of Chicago]

2. You have just completed your 300-page autobiography. Please submit page 217. [University of Pennsylvania]

3. How did you get caught? (Or not caught, as the case may be.) [University of Chicago]

5. Have you ever walked through the aisles of a warehouse store like Costco or Sam’s Club and wondered who would buy a jar of mustard a foot and a half tall? We’ve bought it, but it didn’t stop us from wondering about other things, like absurd eating contests, impulse buys, excess, unimagined uses for mustard, storage, preservatives, notions of bigness…and dozens of other ideas both silly and serious. Write an essay somehow inspired by super-huge mustard. [University of Chicago]

6. Are we alone? [Tufts University]

7. Modern improvisational comedy had its start with The Compass Players, a group of University of Chicago students, who later formed the Second City comedy troupe. Here is a chance to play along. Improvise a story, essay, or script that meets all of the following requirements:

8. If any of these three inanimate objects could talk, how would your room, computer or car describe you? [Haas School of Business at UC Berkeley]

9. Can a toad hear? Prove it. [Bennington College]

10. The late William Burroughs once wrote that “language is a virus from outer space.” We at the University of Chicago think he¹s right, of course, and this leaves us wondering what else came here with it. Could this finally explain such improbable features of modern life as the Federal Tax Code, non-dairy creamer, Dennis Rodman, and the art of mime? Name something that you assert cannot have originated any other way. Offer a thorough defense of your hypothesis for extraterrestrial origins, including alternate explanations and reasons for eliminating them from consideration. [University of Chicago]

11. If you were reduced to living on a flat plane, what would be your greatest problems? Opportunities? [Hamilton College]

12. “Don’t play what’s there, play what’s not there.” – Miles Davis [University of Chicago]

13. Having observed the recent success of television shows about young people, the University of Chicago has decided to pitch a pilot proposal to the networks. . . . In the tradition of the University of Chicago school of improvisation and its offshoot, the Second City comedy troupe, help us out by creating a story for your proposal. Remember that this is Chicago, so it is better to err on the side of intellectual pretension than on the side of pure silliness. Please bear in mind that Felicity has already been done. The setting is near a grand college campus — green, leafy and gothic — in a major Midwestern city. Incorporate into your story:

a) A genre from the following:

b) A character from the following:

c) A prominent prop from the following:

14. In the year 2050, a movie is being made of your life. Please tell us the name of your movie and briefly summarize the story line. [New York University]

15. Elvis is alive! OK, maybe not, but here in the Office of College Admissions we are persuaded that current Elvis sightings in highway rest areas, grocery stores and Laundromats are part of a wider conspiracy involving five of the following: the metric system, the Mall of America, the crash of the Hindenburg, Heisenberg’s uncertainty principle, lint, J.D. Salinger and wax fruit. Help us get to the bottom of this evil plot by constructing your own theory of how and why five of these items and events are related. Your narrative may take any form you like, but try to keep your theory to under two pages. [University of Chicago]

16. Write a short story using one of the following titles:

17. Sartre said, “Hell is other people”; but Streisand sang, “People who need people / Are the luckiest people in the world.” With whom do you agree and why? Don’t be icky. [Amherst College]18. Albert Einstein once said,”The most beautiful thing we can experience is the mysterious. It is the source of all true art and science.” Propose your own original theory to explain one of the 16 mysteries below. Your theory does not need to be testable or even probable; however, it should provide some laws, principles, and/or causes to explain the facts, phenomena, or existence of one of these mysteries. You can make your theory artistic, scientific, conspiracy-driven, quantum, fanciful, or otherwise ingenious — but be sure it is your own and gives us an impression of how you think about the world.

19. If you could balance on a tightrope, over what landscape would you walk? (No net.) [University of Chicago]

20. Tell us the question you think a selective college should ask. How would you answer it? [Haas School of Business at UC Berkeley]

Write a haiku, limerick, or short poem that best represents you.