Parents of college-bound high school seniors out there, have you ever wondered, "What if Adam [or Emily] graduates with a four-year degree, lots of loan debt, and can't find a job worthy of his [or her] education?" That nagging question is becoming more and more pertinent in today's economy, where companies and even the military are shaving jobs. It's Cutback City and the ante keeps going up.

I received some information the other day that informs us that now a graduate degree is more important than ever. Just when you thought four-year college was a meal ticket. Consider this: "According to the Bureau of Labor Statistics, jobs requiring a Master’s or Doctorate are growing at 22% and 20% respectively from 2010 through 2020 while jobs requiring a Bachelor’s degree are growing at 17%, and a high school diploma only 12%. In addition, those with graduate degrees have an average of up to 72% higher lifetime earnings and experience about half the unemployment rate as those with only a Bachelors Degree (2011). The highest job growth is in specialized areas of study including biomedical sciences, healthcare professions, math, finance, education, and engineering." The implications here are imposing.

One rational line of thought might be to consider the relationship between oppressive loan debt and the possibility that your son or daughter may not be able to find employment, not only in his or her area of academic pursuit but also in a job that pays enough to sustain a reasonable standard of living while paying off any accumulated loan debt. Once again, the issue of paying for college collides with reality. 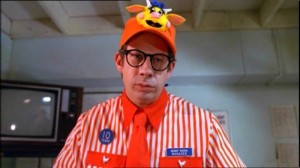 Well, what are the current realities of college graduates working jobs that are well below their qualifications? Mary Beth Marklein, writing in USA Today, gives us a glimpse at those nasty "current realities." Here's some of what she says:

Study: Nearly half are overqualified for their jobs

Nearly half of working Americans with college degrees are in jobs for which they're overqualified, a new study out Monday suggests.

The study, released by the non-profit Center for College Affordability and Productivity, says the trend is likely to continue for newly minted college graduates over the next decade.

"It is almost the new normal," says lead author Richard Vedder, an Ohio University economist and founder of the center, based in Washington. ...

... Vedder, whose study is based on 2010 Labor Department data, says the problem is the stock of college graduates in the workforce (41.7 million) in 2010 was larger than the number of jobs requiring a college degree (28.6 million).

... "Right now you can look around the world and you can see a lot of high-tech, high-value high-productivity jobs that we are not doing in this country, in part because our country does not have the requisite skills," says Joe Minarik, of the Washington-based Committee for Economic Development. Foregoing college "is not what we should aspire to."

"On one hand, it’s a positive thing that so many Americans are getting college degrees — the number of those with a bachelor’s as their highest degree grew to 41 million between 2002 and 2012, a 25% boost. Those with associate’s degrees jumped 31% and American earning a master’s or doctorate jumped 45% and 43% respectively.

On the other hand, all those degrees don’t have enough places to go where those qualifications are needed: Vedder says there are more college graduates in the workforce at 41.7 million than there are jobs requiring a college degree, at only 28.6 million jobs."

Further confirmation of this dilemma comes in a real-life comment from a poster on College Confidential:

"Ahh yes my daughters best friend is a part time cashier in a liquor store, graduated with a BS in math. Her other friend is has BS in math certified HS/special ed and went on several interviews recently for substitute position, 200 people interviewed, for a temp teaching spot that will only go from end of Feb till June, she is a part time waitress. Another obtained Chem Engineer degree, enrolled in PA school out of desperation, requiring another 3.5 years for another degree.

I have many others but wont bore the audience with the depressing statistics for class of 2012, with class of 2013 on their heals.

Another reason to keep the undergrad bills as low as possible."

Yes, there's the rub: loan debt. I've discussed the perils of excessive college loan debt here before. It doesn't take a rocket scientist (who may be currently working at Wendy's) to see the folly of massive graduation debt meeting woeful underemployment. So, you ask, what's a parent to do?

My first suggestion would be to find out what your child's true motives are for wanting to attend a certain school. Does s/he want to go there because it's "prestigious" (whatever that means)? Does s/he have a genuine motivation to enter a certain degree program? Maybe s/he just wants to get far away from home, when, in reality, s/he could get a completely satisfactory and practical education closer to home, or even at home, through a community college or technical trade school.

I know, I know. Perish the thought of living at home for another four years! However, the real world can easily chew up and spit out new and unaware college graduates. Of course, I would be the last one to throw cold water on college dreams. There are myriad success stories of new grads who land on their feet in upwardly mobile and properly compensatory employment, even those with considerable loan debt.

But, a word to the wise parent (and aspiring high school senior): Look before you leap. Try to see the long-range Big Picture before making a commitment to a higher educational path that may look scenic for four years but ultimately lead to the drive-up window, checkout line, or worse.