Is College Greek Life for You?

Speaking of college Greek life (that's referring to fraternities and sororities, in case you didn't know), I remember one event from my dim college past: a "Back to The Womb" party held at the fraternity house next to my dorm. Arriving guests had to crawl through a long, pink tube (made from a huge leftover air-handling hose). You can imagine how much fun that was.

I wasn't a frat boy. I was a so-called GDI" "Gosh Darn" [edited for terminology content] Independent. However, I was constantly getting an eye and ear full of amazing (and, yes, sometimes disgusting) goings on across the way.

When I think about fraternity life (and, I guess, to some extent, sorority life), I often recall Master at Arms Doug Neidermeyer's opening statement at the Delta House disciplinary hearing in the movie Animal House. He said, regarding a recent Delta party: "And most recently of all, a "Roman Toga Party" was held from which we have received more than two dozen reports of individual acts of perversion SO profound and disgusting that decorum prohibits listing them here. " LOL. That must have been some party! 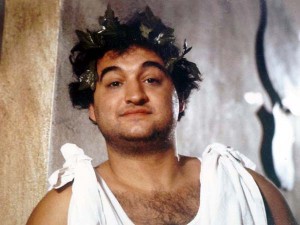 Anyway, the point of my post here is to present some food for thought. When you finally arrive on campus, should you consider joining a fraternity or sorority to enhance your social life?

Petersons.com has an excellent article about making that decision. I'd like to share some highlights from that to perhaps help you with your college social life decision down the road.

Should Your College Life Include Greek Life?

By Howard and Matthew Greene

Many students are predisposed either for or against not only joining a Greek organization, but even attending a college at which Greeks have a presence. Many stereotypes and mythologies abound, most having to do with the "Animal House" image of frats or the "Southern Belle" reputation of sororities.

Some of you might be sure that you want to join a house in order to find social bonding, parties, post-college networking opportunities, and a nice campus housing option. Others might be certain that Greeks are all bad and don't want to go near a campus that sponsors them . . .

First of all, most stereotypes are only partially true. Yes, Greek houses (and fraternities in particular) are often a place for big-time partying on campuses that have at least moderately sized systems. That's where a lot of the drinking takes place, where bands play, and where pre- and post-game parties happen.

However, most Greek organizations also contribute to college life in other ways . . .

There are a few factors that determine the relevance and influence of Greeks on any campus. One is the overall percentage of students that join. Twenty to thirty percent of the student body represents a moderate level of Greek involvement. Fifty percent is a much more dominant and significant proportion.

Another issue is the size of the college's student body overall. In a small college of 2,000 students, a 40-percent Greek population makes for a very strong impact on student life and campus culture. There will likely be very few other social outlets on campus beyond Greek life. At a university of 20,000 students, 40-percent Greek participation still leaves 12,000 individuals who are not affiliated with a fraternity or sorority . . .

The timing of fraternity and sorority rush (when students campaign to join a house) can strongly affect the influence of the system on residential and social life. We are still amazed by the many colleges and universities that allow rush during freshman fall, or even before classes start.

Greek houses are exclusive by nature, even though some colleges have houses that maintain open enrollment or guarantee that all students who rush will be offered at least one bid . . .

For those of you leaning toward joining, you should note that some colleges have only non-residential Greek organizations. Either the college banned residential houses, or the houses developed at a later stage and did not play a strong role historically in providing campus housing. In any case, non-residential houses tend to have less of a social impact on student life because members continue to live in college housing, especially during their first two years of college . . .

You make the decision about your college life

Ultimately, only you can decide if a fraternity or sorority is right for you. The best opinion, however, is an informed opinion. Before you begin to lean in one direction or the other, look into what the Greek system is like at the schools you are considering. From there, you can figure out if you want to rush . . .

So, that should be enough quality information to get you started thinking about how to manage your campus social life, once you get to college. I know that I have used the movie Animal House in the past here for college "fun" comparisons. If you think the goings on at Delta House are extreme, you may care to think again. Just do an Web search for college fraternity stunts and check out some of the hits you get. They range from parking a Volkswagen on top of the big MIT "dome" building to, well, returning to the womb.

Sounds like fun, doesn't it? I'll leave you with Otter's famous words of defense from the Delta disciplinary hearing: "I put it to you, Greg - isn't this an indictment of our entire American society? Well, you can do whatever you want to us, but we're not going to sit here and listen to you badmouth the United States of America. Gentlemen!" [Otter leads the Deltas out of the hearing, all humming the Star-Spangled Banner].