Internships: Worth The Effort?

Would you be willing to work for nothing to gain an advantage in getting paid employment? That seems to be the case for some college students (and even graduates) who have come head to head with the realities of today's job market. I'm talking about internships here.

For the uninitiated, an internship is defined as "a system of on-the-job training for white-collar and professional careers. Internships for professional careers are similar to apprenticeships for trade and vocational jobs. Although interns are typically college or university students, they can also be high school students or post-graduate adults. Rarely, they can even be middle school or in some cases elementary students."

Traditionally, thinking has been that an internship will likely lead to employment with the company for which the intern is working. That sounds good on paper, but the reality today is that there are no guarantees. One source comments that ". . . the internship works as an exchange of services for experience between the student and his or her employer. Students exchange their cheap or free labor to gain experience in a particular field. They can also use an internship to determine if they have an interest in a particular career, create a network of contacts, or gain school credit. Some interns also find permanent, paid employment with the companies in which they interned. Thus, employers also benefit as experienced interns need little or no training when they begin full-time regular employment." 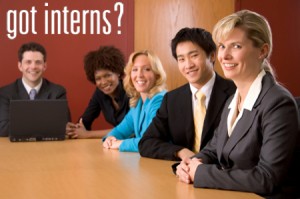 In a recent New York Times article, Steven Greenhouse discusses the pluses and minuses of using internships to enhance job prospects and even launch a career. Here are some highlights:

Confronting the worst job market in decades, many college graduates who expected to land paid jobs are turning to unpaid internships to try to get a foot in an employer's door.

While unpaid postcollege internships have long existed in the film and nonprofit worlds, they have recently spread to fashion houses, book and magazine publishers, marketing companies, public relations firms, art galleries, talent agencies — even to some law firms. . . .

. . . Although many internships provide valuable experience, some unpaid interns complain that they do menial work and learn little, raising questions about whether these positions violate federal rules governing such programs.

Yet interns say they often have no good alternatives. As Friday's jobs report showed, job growth is weak, and the unemployment rate for 20- to 24-year-olds was 13.2 percent in April.

. . . Ross Perlin, author of the 2011 book “Intern Nation," said postcollege internships used to be confined to a few fields like film but have become far more common. “The people in charge in many industries were once interns and they've come of age, and to them unpaid internships are completely normal and they think of having interns in every way, shape and form," he said. . . .

. . . Some people end up on an internship treadmill. Joyce Lee, who received a film degree from Wesleyan in 2010, moved to Los Angeles and did six unpaid internships, including one for Scott Rudin, a top Hollywood and Broadway producer.

Her duties included reading scripts and picking up the mail. To pay her rent, she worked at a coffee shop and handed out fliers for a taxi company.

“Scott Rudin is made of money," she said. “I don't think it would be so hard for him to pay five interns the minimum wage."

A spokesman for Mr. Rudin said he could not be reached for comment.

Ms. Lee, who is now in New York making her own film and supporting herself by again working at a coffee shop, said interns deserved better.

“If I ever become a famous filmmaker," she said, “I promise I will pay my interns."

The bottom line for internships appears to be that upfront research about the company offering the internship would be a good investment of time. Questions to ask: Who has interned here before? Were any of those interns hired? Were their internships paid or unpaid? What was the term of their internship? Would you provide a reference for me if I have a post-internship job opportunity? And so forth.

As I said, it's time well spent investigating any internship possibility. Perhaps the main question to answer would be: Will I get important and pertinent work experience or will I mainly be taking lunch orders and picking up dry cleaning?