What does it take to inspire college students to get good grades? Similarly, what drives high schoolers to burn the midnight oil? For the former group, a high GPA opens the door to more and better job opportunities. For the latter, younger group, a higher class rank means a possible better shot at a more competitive college where they can reinitialize their variables and begin the manic pursuit of good grades all over again. What else, though, can provide a carrot on a stick for these strivers, especially those who strive in the vaunted halls of ivy? Hint: It's a four-letter word.

C-A-S-H. The local newspaper here in my region is always running pictures of grade-school students who have earned free hamburgers or books by having good report cards. That same principle has now been extrapolated and applied to college students interning with companies, as part of their undergraduate curriculum. The companies for which they work (at least some of them) are rewarding high academic performance with money. Whatever it takes, eh? 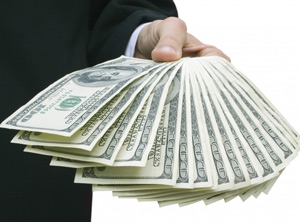 Who and what are Zimmerman Advertising? Well, according to a description written, no doubt, by one of their top ad men or women, they are "the country's leading national retail brand builder, and the 14th largest advertising agency in the United States according to Adweek, with more than 1,100 full-time associates and offices throughout the country, including New York, Los Angeles, Chicago, Dallas and Atlanta." Impressive.

But what does all this have to do with inspiring higher grades for college students? Here's their secret, as reported in a press release:

Being smart really pays at Zimmerman Advertising. The agency has selected one winner from its competitive 2010 InfuZion Internship Program to be paid for their performance in a big way. That's because during their final year of college, Zimmerman will pay for every 'A' the winner receives. An added incentive? If they get all 'A's, the agency will guarantee them a job upon graduation.

Byron Oldham is the lucky winner of “Paying for A's." Byron is a rising senior at the University of Florida where he is finishing up a degree in Advertising. Byron chose Zimmerman's InfuZion program because of its reputation for providing a rigorous, in-depth experience. Byron will be graduating from UF this December.

Students participating in the InfuZion Internship Program had no idea a competition was underway. The winner was selected August 19th from a group of 20. They were chosen through a two-phase evaluation process that included both objective surveys and the interns' final presentations.

“Our agency believes that performance should be rewarded. Sometimes in life there is no second place, “ says Jordan Zimmerman, founder and chairman of Zimmerman Advertising. “Sometimes the best way to train students for the real world is to throw them into it head first."

The InfuZion Internship Program gives students a chance to use their classroom education to develop campaigns for real-life clients. This year, each team of five was assigned a campaign for Party City, with final presentations made to the client on August 19th.

“In today's competitive job market, it's more important than ever for these students to hone their skills," adds Michael Goldberg, Executive Vice President and Chief Marketing Officer. “The InfuZion Program is unique in that it gives them a taste of the real word, with real pressures for performance in front of real clients."

In addition to paying for each class in which the winner receives an 'A', the winner will also benefit from one-on-one mentoring from Jordan Zimmerman. That includes giving them the chance to be a guest columnist on his blog, www.YouSleepWhenYouDie.com <http://www.YouSleepWhenYouDie.com> . Zimmerman will also document and track their senior year of college through social media, as well as a series of videos.

“I'm elated to be selected as the winner of Zimmerman's new “Paying for A's" program," says Byron. “I put a ton of time and energy into my internship here. The experience that I got was invaluable. Receiving financial support for the remainder of my college career, in addition to the possibility of a job when I graduate, is like icing on the cake."

Nice. And speaking of interns and internships, here's some encouraging news for those of you college students who are already interning or aiming to become interns. A Wall Street Journal poll shows that more and more internships are leading to full-time hires:

As companies start to rely more heavily on their internship pools to make full-time hires, they're looking for ways to better evaluate candidates and targeting younger students.

A quarter of the nearly 480 respondents to The Wall Street Journal's survey of college recruiters said more than 50% of their new-graduate hires had been interns at their companies; 14% said more than 75% were. Similarly, the National Association of Colleges and Employers reported in its 2010 Internship & Co-op Survey that nearly 57% of students from the class of 2009 were converted from interns to full-time hires, up from 50% the previous year . . .

So, there's pay for A's and hopes for hires. All in all, the road of the intern is looking better and better.