How Bad Is The Student Debt Situation?

I've been reading some amazing statistics regarding the amount of debt college students and their parents have accumulated. The real problem appears to be that families can't keep up with the pace of rising college costs, a situation exacerbated by America's floundering economy. How bad is the college cost situation? Take a look at this chart from InflationData.com: 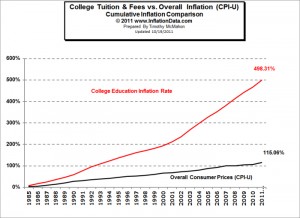 You don't have to be an economist to see the disparity here. The arguments regarding what is causing this upward spiral is a subject for another day, however. The point today is that student loan debt has now surpassed the total of both credit card debt and auto loan debt. That alone should boggle your mind. My personal opinion is that if something isn't done to stop the spiral (no, I'm not suggesting a government bailout!), mortgage debt might also be overtaken. Stop the madness!

If you need to get a good handle on just how bad this situation is, you should read the Washington Post's business section's article Student loans seen as potential ‘next debt bomb’ for U.S. economy. Here are the highlights to whet your appetite:

Bankruptcy lawyers have a frightening message for America: They’re seeing the telltale signs of a student loan debt bubble that is placing increased financial pressure on families struggling with their children’s mounting debt. According to a recent survey by the National Association of Consumer Bankruptcy Attorneys, more than 80 percent of bankruptcy lawyers have seen a substantial increase in the number of clients seeking relief from student loans in recent years.

In most cases, those clients could not meet the federal hardship standards that are necessary to discharge a student loan through bankruptcy proceedings. Instead, many of these parents or guardians who co-signed the student loans face the prospect of losing their life savings, cars or homes to collection agencies for aggressive private lenders.

William Brewer, head of NACBA, has said, “This could very well be the next debt bomb for the U.S. economy” — something akin to the housing mortgage loan crisis that triggered the U.S. financial crisis. ...

... The amount of student loan debt has skyrocketed in recent years to a total of $867 billion last year — or more than the $704 billion in outstanding U.S. credit card debt, according to the Federal Reserve Bank of New York. Of the 37 million borrowers who have outstanding student loan balances as of third-quarter 2011, 14.4 percent have at least one past-due student loan account.During the 2010-11 academic year, students and families borrowed $104 billion in loans from the Education Department, a 50 percent increase over three years. Private education loans fell by 65 percent in that time, to $7.9 billion in 2010-11.

College seniors who graduated with student loans individually owed an average of $25,250, up 5 percent from the previous year, according to a study by Brewer’s group. Parents are responsible, on average, for $34,000 in student loans, a figure that rises to about $50,000 over a standard 10-year repayment period. An estimated 17 percent of parents whose children graduated in 2010 took out loans, a 5.6 percent increase from 1992 and 1993. ...

... A report last year by the Pew Research Center and the Chronicle of Higher Education warned that public anxiety over college costs is at an all-time high. Moreover, “low income college graduates or those burdened by student loan debt are questioning the value of their degrees,” saying the cost of college has delayed other life decisions, the report said.

The Inghams of suburban Minneapolis are an example of how one family got into hot water. David Ingham, a 70-year-old disabled Vietnam War veteran, co-signed about $50,000 in student loans for his son to attend a fine-arts school in Minneapolis as well as Catholic University. ...

... More than 125,000 people have signed an online petition to protest a $50 forbearance fee that Sallie Mae, the private student loan giant, had been charging borrowers for years whenever they deferred payments on a loan. Federal programs that provide the preponderance of loans do not charge such fees.

Stef Gray, a Hunter College graduate from New York who has paid $300 in forbearance fees to the company since May, organized the petition drive in hopes of persuading Sallie Mae to drop the fee, just as Bank of America and other financial institutions dropped unpopular fees in the face of Internet protests. ...