Eating while in college. That phrase conjures images of the so-called "Freshman 10" (or more realistically these days, the "Freshman 15"), which refers to the weight gain many new college students experience their first year away from home on campus. For me, that phrase brings back memories of the Hilltop Sub Shop, which was right across the street from my freshman dorm. My roommate and I contributed heavily to keeping the HSS in business. Every evening we would flip a coin to see who would "fly" (make the food run) and who would buy. I can still taste those steak sandwiches, slathered in mayonnaise. But I digress.

Unfortunately, the reality for some college students these days is not adorned with growing waistlines or mayo-covered steak sandwiches. The picture is much more serious. In fact, a growing number of students have come to rely on government support, in the form of food stamps. I was unaware of how widespread the problem is until I saw the details in a recent news article. 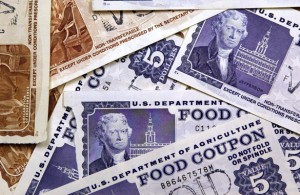 CBS Atlanta reports that "Tuition hikes, combined with the increased cost of general living, have left many college students more strapped for cash than ever before.

As such, more and more are turning to tax-funded food stamp programs to help them afford the essentials."

If you're like me, you may have difficulty imagining any young person capable of paying the price to go to college needing government assistance to eat. It's happening, though. Here's CBS Atlanta's rest of the story.

Tuition hikes, combined with the increased cost of general living, have left many college students more strapped for cash than ever before.

As such, more and more are turning to tax-funded food stamp programs to help them afford the essentials.

The program – the Supplemental Nutrition Assistance Program, or SNAP for short – is offered by the United States Department of Agriculture for qualifying people in need.

According to its website, eligibility requirements for the program include gross and net income tests and employment requirements. It is designed primarily to assist families, however students can apply, given the age and work stipulations in place for qualification.

A sum of $200 is awarded to program participants each month, which is to be used toward grocery bills.

The stigma of the cash-strapped college student is nothing new. The use of government aid in amending the situation, however, is a more recent phenomenon.

The educational institutions are reportedly not at all involved in the process on any level, but use of SNAP for help with food bills has become something of a widely accepted practice on campuses.

Ravae Graham, the deputy director of legislative affairs and communications for the state's Department of Human Services, said that a student's eligibility depends largely on the amount of time they work outside of the classroom.

“If (an applicant) is working at least 20 hours per week and meets income limits, they can qualify … and college students are eligible," she told CBS Atlanta. “And there has been a significant increase of use in the program over recent years."

She added that students who participate in school-funded work study programs may also make the cut.

Food stamp statistics for the state of Georgia provided to CBS Atlanta show that the average size of a household receiving food stamps in 2011 averaged out to 2.40 persons.

The totals for both households and individuals have increased over the past six years, but the latter has seen an especially large spike, rising from just under 950,000 individual users in 2006 to almost 1,740,000 in 2011.

According to The Signal, a student-run newspaper at Georgia State University, a basic meal plan at the school can cost approximately $1,700, which is more than many students can reportedly afford.

“With me being a senior and living on campus for the past four years, I honestly got tired of paying that amount of money per semester just to eat," student Taylor Smith told the paper. “I did not even know that I was applicable for food stamps until someone told me about the site and to apply to see if I would get it."

Added Smith, “Since then, I have saved a ton of money."

I posted this story on the College Confidential discussion forum and it generated quite a few spirited comments. So, think about those students who may be scraping by and if you happen to know any of them personally, do them a favor and send a care package now and then. But don't pack up anything with mayo on it.