Helicopter Parents: A Source of Depression?

This information is directed to high schoolers, college students, and (perhaps most of all) the parents of teens. Here's a question for you high schoolers and college students: How involved in your life are your parents? In other words, how much independence do you enjoy within your lifestyle? Are you able to go about your school work, social activities, and daily life with a minimum of parental control, or is one or the other (or both) of your parents constantly present, hovering, directing, or even controlling your life?

Now, turning the spotlight on you parents, how integrated and actively involved are you in your teen's life? Pause for a moment and ask yourself if you may be suppressing the developing independence of your child. Do you insert yourself into areas of his or her life that, in fact, don't require your presence or actions?

One particular memory that I have from my younger years might serve as an example of what I'm talking about. When I was in ninth grade, my family went on a beach vacation with another family whose son was my age. He and I got along well, as did our respective parents, so I was looking forward to some fun in the sun. We arrived at the beach and promptly started to have a good time. This young lad and I were both without siblings, the only-child syndrome. Anyway, all was cool until the first morning we were there. I had gotten up and made my breakfast, a quick bowl of cereal and some orange juice. No big deal.

I milled around outside our cabin (yes, those were those storied days of yesteryear when people vacationed at beach resorts that had cabins), waiting for my buddy to get up. He was a late-sleeper. I finally heard him stirring, after his mother semi-loudly prodded him to get up. He greeted me with a yell from the kitchen and said that he would be right out as soon as he had breakfast, so I grabbed a seat on the porch of his cabin and waited. While I was waiting, I heard his mother attending his breakfast needs. She asked him what kind of cereal he wanted and then I heard her pouring it into a bowl for him. Next (and, finally, here comes the money quote), I heard her ask him, "Do you just want me to sprinkle sugar on this or would you like me to dissolve the sugar in some milk first and then pour it on your cereal?"

Yikes! Was she a Mom or a butler? I've often thought about that incident and wondered how my buddy's life turned out. Maybe his Mom tied his shoes for him. If he got married, maybe she went on his honeymoon with him. Visions of Norman Bates danced in my head. Anyway, a recent report has given me a clue about the kinds of effects over-involved parents can have on younger children, especially teens. 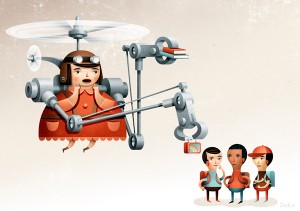 The headlines from this Reuters article note, "Hyper-parents can make college aged children depressed-study ... Turbo-charged parents still running their university-aged children's schedules, laundry and vacations could be doing more harm than good with a study on Wednesday showing these students were more likely to be depressed and dissatisfied with life." This could offer me a clue about the later life of my high school friend who had the sugar-dissolving Mom. Let's take a look at some revelations (in italics) from this article.

Her study found students with over-controlling parents were more likely to be depressed and less satisfied with their lives while the number of hyper-parents was increasing with economic fears fuelling concerns over youngsters' chances of success ...

To find parents so closely involved with their college lives, contacting their tutors and running their schedules, is something new and on the increase. It does not allow independence and the chance to learn from mistakes.

Another CC parent notes, "My parents were like that. They boosted their own self-esteem by keeping their kids helpless and clueless. I wasn't taught how to be independent because my mother needed me to stay needy so that she could feel superior and relevant." I can envision my beach buddy's mother ironing his underwear and sweat pants!

Schoolmaster Mike Grenier notes ... "the increase in helicopter parenting in the past 10 years had accompanied a changing attitude towards childhood, with more anxiety and fear over youngsters now seen as being at risk and vulnerable if confronted with failure ... There is a very fine line between the helicopter parent and the committed and caring parent while at the other end of the spectrum is the negligent parent which can be more dangerous."

Another CC parent counters with this: "I would imagine there are plenty of helicopter parents on the CC forum. I don't believe that helicopter parents are helping their child become independent by their constant hovering. This is an important time for them to gain confidence. Be an involved parent, but don't jump in every time you think they are making a mistake. They will learn from them."

Grenier agrees. "The real danger of hyper-parenting is that it is intrusive and parents don't let their children make their own decisions, take risks and learn for themselves."

So, here's what I suggest: Parents, if you're dissolving sugar, so to speak, for your teens, stop for a moment and try to project any long-term consequences of your helicoptering. Do you see any signs of depression or negative feedback as a result of your pampering (sometimes known as "controlling")? If so, it's probably time for some self-scrutiny. You might also want to join the discussion at College Confidential.

High schoolers, are your parents heavy hoverers? Do you feel crowded by their intrusions into your life? Is their presence and parenting causing negative back-pressure in your daily life? Are you feeling depressed or resentful? If so, it's time for a nice sit-down with them. Be nice, but be objective about the issues they may be causing. It's never too early to get a jump on circumstances that may affect your later life.