The Early Decision/Early Action circus is mostly over for yet another year. Things haven't gotten any better for stressed-out applicants.

Looking at the results from the top schools that so many lust after shows once again how heavily the deck is stacked in favor of the colleges, much to the displeasure and burden of the applicants. All things considered, it's very tough at the top of the higher education pyramid. The farther up you want to climb, the steeper the slope becomes.

"Regardless of what the stats may suggest, I agree with the folks who contend that this was the toughest-ever year for admissions. Even if some applicant pools went down or acceptance rates went up, the statistics can’t measure the spiraling stress levels that come from stacking transcripts with AP classes, from expanding resumes with student-founded non-profit corporations and costly “volunteer” trips abroad, and from wondering where the money will come from to pay for all of this in a struggling economy. 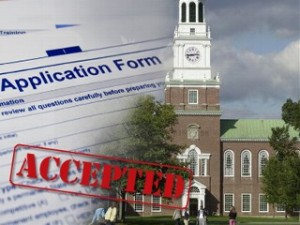 "Parents who never even glanced at an SAT-prep book when they were in high school themselves are now springing for private tutoring for their progeny, with the belief that even the priciest test-prep classes won’t suffice. High school students are increasingly sacrificing courses they want to take or activities they want to pursue in favor of those that “look good” on applications. And middle school students are worrying that a “B” in earth science will torpedo their college dreams. (I write the “Ask the Dean” column for College Confidential and my inbox is full of such laments.)

In spite of exhortations, such as one in ... “The Choice,” to consider strong lesser-known colleges, the interest in “name” schools continues to grow.

So each year I find this crazy process tougher than in years before, regardless of how you crunch the numbers."

So what's the root problem of "this crazy process"? Let's take a look.

. . . a survey of the National Association for College Admission Counseling found that colleges and universities are increasing the number of students admitted through early admissions programs.  This development is highly disturbing, especially in light of a new study, published in Teachers College Record, highlighting the inequity of the practice, which is employed at many institutions.

... The study found not only that white and wealthier students were more likely to apply early; in addition, other factors mattered a great deal.  Receiving private college counseling was the strongest predictor of enrolling through early admissions.  In addition, attending a high school where each college-counselor has a manageable number of students increased the chances of students taking advantage of early admissions.

Importantly, while most previous research on early admissions has focused on a small number of elite institutions, Park and Eagan’s study, “Who Goes Early? A Multi-Level Analysis of Enrolling via Early Action and Early Decision Admissions,” employ a much larger national data set involving 88,086 students who came from 4,491 high schools and applied to 290 colleges and universities.

The authors point out that the policy of early admissions – like the policy of legacy preferences – defies the commitment of colleges to make “need blind” admissions.  They write: “early decision in particular works as a sort of class-based affirmative action that gives wealthier applicants a ‘plus’ factor: a higher likelihood of being admitted than if they applied under the regular decision deadline.”

In rough economic times, it will be said that colleges and universities have to do what they can to make ends meet – including policies that indirectly preference wealthy candidates.  The danger, however, is that even in better times, these programs will become embedded as regular practice.  As Park and Eagan note, “At a minimum, institutions need to look inward and ask serious questions about the patterns of who applies and is accepted early, and the implications of offering advantages to students who generally already are advantaged in the admissions process.”

As I mentioned above, "Looking at the results from the top schools that so many lust after shows once again how heavily the deck is stacked in favor of the colleges." So, in my humble opinion, I think it's time that parents counsel their sons and daughters about sensible choices, sensible timing, and the advantages of keeping a number of options open.

Early Decision and to a somewhat lesser degree, Early Action can be both highly stressful, frustrating, and financially more difficult than Regular Decision. To read about the manifestations of these side effects, check the College Confidential discussion board threads on ED and EA. They may help you make a more informed choice of strategies.