I started a thread on the College Confidential discussion forum about the purpose of college. Is that purpose education or employment credentials? That contention has inspired some spirited opinions. However, there may be a stealth third option for the purpose of college: fun, and by extension, happiness. Have you ever seen the movie Animal House? This pretty much covers the topic of fun (and happiness) at college. Of course, the hub of the wheel at hypothetical "Faber College" (where Animal House's Delta fraternity is located) is alcohol. Remember this advice from Bluto to Flounder after a particularly harrowing road trip to "Emily Dickinson College"? "My advice to you is to start drinking heavily." Or how about Dean Wormer's admonition to the Delta crew upon arriving for a surprise visit: "Well, well, well. Looks like somebody forgot there's a rule against alcoholic beverages in fraternities on probation!"

So, what are the consequences of drinking (not only just "drinking," but binge drinking) in college, other than hangovers and stinky clothes? Well, a new study says that happiness may be one positive consequence. Interesting, eh? Parents reading this may cringe when they think about their son or daughter being more on the sunny side of the street if they (the son or daughter) are located, mouth agape, beneath the spigot of a beer keg. Welcome to reality, this new study implies. 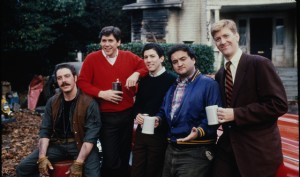 The study is entitled "Binge Drinking College Students Are Happier Than Their Non-Binge Drinking Peers" and was presented at the 107th Annual Meeting of the American Sociological Association in Denver, Aug. 17-20 this year (2012).

Here are a few highlights to whet your whistle, so to speak.

Why do some colleges have persistently high levels of binge drinking? It may be because, at these schools, binge drinking is associated with high status and binge drinkers are happier with their college social experience than their non-binge drinking peers, suggests new research to be presented at the 107th Annual Meeting of the American Sociological Association.

“Binge drinking is a symbolic proxy for high status in college,” said Carolyn L. Hsu, co-author of the study and an associate professor of sociology at Colgate University. “It's what the most powerful, wealthy, and happy students on campus do. This may explain why it's such a desirable activity. When lower status students binge drink, they may be trying to tap into the benefits and the social satisfaction that those kids from high status groups enjoy. And, our findings seem to indicate that, to some extent, they succeed.” . . .

the levels of their higher status classmates, including binge drinkers and non-binge drinkers. Hsu said binge drinking tended to attenuate the negative effects of being from a low status group on students’ college social experience.

Conversely, white, wealthy, Greek affiliated, heterosexual, and male students who did not binge drink, were less happy with their social lives than students from those groups that did binge drink. . . .

. . . Interestingly, the researchers did not find evidence that unhappy students were binge drinking to self medicate. Instead, the students in the sample with the most stress, anxiety, and experiences with discrimination or sexual abuse, were the least likely to drink. “It’s the kids who say everything is great who drink the most,” Hsu said.

social mobility and as a way to contend with an otherwise hostile social environment,” Hsu said.

According to the authors, despite binge drinking’s potential positive social effects, binge drinking students were not exempt from the negative interpersonal and health outcomes associated with heavy alcohol consumption.

“It’s not that binge drinking is the solution to complex social problems,” Hsu said. “Rather, it is our hope that when universities and public health professionals design alcohol related programs for students, they take into account the full range and important social motivations underlying student binge drinking.”

For a fuller understanding of the study's implications, I strongly recommend that you read the entire report. Also, feel free to read and enter in the comments on the College Confidential discussion forum's related thread. Of course, college binge drinking does have a down side, as Kent "Flounder" Dorfman noted in Animal House: "I can't believe I threw up in front of Dean Wormer." To which Boon replies, "Face it, Kent. You threw up "on" Dean Wormer."