Maybe you've already received your decision regarding your ED/EA application. If not, you'll be hearing any day now. It's that time of year. Deferrals are the purgatory of Early Decision and Early Action (ED/EA) college admissions. You're not in, but you're not out. You're just hanging there, waiting for the April decision-shoe to fall. It's exquisite anguish. Many applicants would much rather be rejected outright so that they can just get on with things, without the unfinished business of "admit" or "deny" hanging over them.

For the uninitiated, a word of explanation might be in order. ED and EA admission programs allow students to apply early. The deadline is usually November 1 (sometimes November 15 or even later). The application process is exactly the same as Regular Decision (RD), except that in exchange for the early application, colleges promise to respond with their verdict before the year-end holidays. This can be a great gift for a high school senior. Having his or her college process wrapped up before winter break can give an entirely different flavor to the second half of senior year. Oh, one other note about ED/EA: ED requires a signed promise to enroll if accepted. EA doesn't; accepted applicants have until May 1 to decide whether or not they choose to enroll. 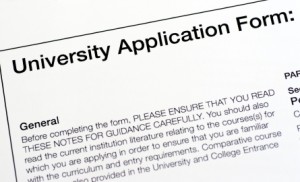 Commonly, a student can apply to both an ED school and an EA school (or several), as long as he or she understands that it is necessary to enroll at the ED college, if accepted there and elsewhere. But, as with most things in this convoluted process, there are exceptions and asterisks galore. For starters, some EA colleges do not permit applicants to apply ED concurrently.  Some even offer "Single Choice Early Action" which means that candidates can't apply concurrently via any other Early option ... even non-binding EA. That's not all.

And, although ED acceptances are binding in theory, financial aid candidates who were offered admission but not sufficient financial aid can decline the offer without penalty (assuming it is done promptly).

Most ED/EA candidates use their early application to court their first-choice college. In most cases, qualified Early Decision candidates stand a slightly better statistical chance of being accepted early than do their RD counterparts. (It's the old "Bird in Hand" theory. Colleges may be willing to make a commitment to a decent sure-thing candidate in the fall rather than waiting for a potentially better one in the spring who could ultimately matriculate elsewhere.) Early Action, however, doesn't provide the same admissions-odds boost because colleges usually don't want to save a slot for a candidate who may never enroll, unless this candidate is one they really want.

So there's a lot of strategizing involved in making the decision to apply ED/EA, particularly in Ivy League admissions and similarly selective processes. For instance, do you use your Early Decision "chit" at a "High Reach" college. (It may be your number-one choice, but do you even have a prayer there, whenever you apply?) Or do you aim, instead, to a slightly less selective college--one that you still really like and where you're likely to get in if you commit to ED ... but which may not admit you in the Regular pool?

And, to muddy the waters even more, an ever-expanding roster of colleges now offer a second round of Early Decision--usually with a January 1 deadline. So sometimes "strategizing" includes moving on to an ED II option after being denied--or even deferred--in December by the ED I choice. (Confusing, isn't it?)

Waitlists are the nasty first cousin of deferrals. Waitlisting generally occurs in April, or at the time when RD accept/deny letters come out. If you are waitlisted, you're also neither in nor out. You're just waiting for a decision that may never come. Colleges use their waitlists to make sure that every bed is filled in their dorm rooms. If not enough accepted students enroll, waitlisted applicants are offered admission. At the very top schools, waitlists are used relatively infrequently because of the high enrollment percentages of accepted students. Still, if you've had your heart set on a particular school and you end up on the waitlist, it can be agonizing. You'll most likely be forced to enroll at another college while hoping for that call from the waitlist. Frankly, it doesn't seem fair at all. Waitlists were designed wholly for the advantage of the college, not you, so keep that in mind.

Now, to the issue at hand: What should you do if you end up deferred or waitlisted? The approach is essentially the same for both. You must undertake a carefully deployed program of self-marketing to further enhance your "almost good enough" application. After all, if the colleges deferring or waitlisting you weren't interested in you, they would have rejected you, right? Let's take a look at what you can do to improve your chances of getting in.

Your job is twofold. First, you need to establish a distinguishable presence with the admissions office without becoming a pest. Second, you need to reveal more of yourself and your sincere passion to attend your target college. How do you do this? Well, you should start to execute this plan the moment you find out that you have been deferred or waitlisted. Don't sit around and mope. Take action immediately. If you don't, who will? To borrow a phrase from Paul Simon, then, here's the plan, Stan:

First, you need to communicate your continued interest with the admission office. This should be done by letter (and e-mail is fine, too.)  In most cases, the best person to contact is the regional rep for your area of the country. Your job is to find out who this person is. Call admissions and ask for that person's name and e-mail address.

The purpose of you letter will be to:

-Emphasize your ongoing interest in this college. (If you will definitely enroll if admitted, be sure to say so clearly.)

-Explain why this college is a great match for you. Your reasons should be as specific as possible ("I have done research on the role of women in Mesopotamia and am eager to work with Professor Snurdley whose writing in this area is renowned") and not generic ("It is an excellent school, and I fell in love with the beautiful campus").

-Provide updates on what you have done since you sent your application. Ideally, this list would include significant achievements ("I won a national physics contest") but, more commonly, you've been too busy with academics and applications to say much more than, "I pulled up my Calculus grade from a B- to a B+"). Once you've communicated this list to your admission rep, you can follow up with additional updates when you have more news to report. Meanwhile, think about how you can generate such news.  Apply for an internship, enter a contest, get a part-time job.

You can also enlist the support of your guidance counselor and ask him or her to telephone the college admission office to lobby on your behalf. Note, however, that admission folks are most interested in speaking to the guidance counselor when the counselor is able to add to the body of information already available in the application and not simply say, "Yep, we still support Sarabelle in her quest to attend your school." However, this added information doesn't have to be breaking news ("Sarabelle won the Nobel Peace Prize!"). It can simply be some small details about you that the original application didn't reveal ("Our guidance secretary mentioned yesterday that Sarabelle is the only senior who actually sent her a thank-you note for all the help she provided last fall.")

Finally, you can always consider going for broke with a "gimmick." For instance, if your application touts your talents as a budding poet, perhaps it's time to write your "Homily to Haverford" or your "Ode to Occidental." Granted, gimmicks don't often work, and there's usually a huge element of luck involved if you try them because an effort that might delight one admission official could potentially irk another. But, especially when it comes to waitlisted candidates at the hyper-selective schools, where your chances aren't too hot to begin with, a carefully conceived outside-the-box approach might just be your very best shot.

Deferrals & Waitlists Summary: Find the key person in admissions, establish contact, and keep in touch with meaningful communications, emphasizing why this place is a great match for you and what you can contribute once you get there. Granted, this takes a lot of careful and diligent effort. However, when that deferral or waitlist letter arrives, you have to ask yourself one critical question: "How badly do I really want to attend this college?" Your answer to that question should determine your course of action. If you decide to go for it, use this plan. It should give you your very best shot. Best wishes on your college admissions quest!