Who is the dark horse of higher education these days? Community colleges, of course.

As the college-cost bubble continues to expand, more and more students and families are distancing themselves from the impending explosion. It appears that a surging consumerist mindset is causing a significant uptick in community college (CC) attendance. Surprisingly, those who are enrolling don't fit the stereotypical profile of the "average" CC attendee. According to an Inside Higher Education article, "Nationwide, 22 percent of college students with annual family incomes over $100,000 attended community colleges last year, up from 16 percent four years ago, according to a study by Sallie Mae." That statistic alone should give traditional four-year colleges pause for thought.

The Pew Research Center confirms this: "The share of 18- to 24-year-olds attending college in the United States hit an all-time high in October 2008, driven by a recession-era surge in enrollments at community colleges, according to a Pew Research Center analysis of newly released data from the U.S. Census Bureau.

Just under 11.5 million students, or 39.6% of all young adults ages 18 to 24, were enrolled in either a two- or four-year college in October 2008 (the most recent date for which comprehensive nationwide data are available). Both figures — the absolute number as well as the share — are at their highest level ever." 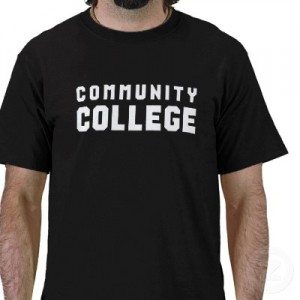 What does this mean to you, then? Well, it could mean a highly effective alternative to staggeringly high college costs and long-term student (and even parental) debt. The effects of the latest economic downturn are having major consequences on American families and they have obviously started to seek relief in providing higher education for family members, both young and older. Here are some more highlights from Paul Fain's enlightening Inside Higher Education article.

Community colleges are hot these days, and not just with photo-op seeking politicians. They're an increasingly popular choice for 18-22 year-olds from the upper middle class, thanks to cheap tuition, a career focus, smoother transfer options and growing public respect for the sector's academic chops ...

Relatively affluent young students are typically better-prepared academically and have a good chance of earning a degree. They are also more likely to attend full-time, require less remediation than their peers and can be cheaper for community colleges to educate.

But this group is also demanding, as traditional-age students want a full campus experience with amenities like fitness centers and extracurricular activities, which can mean new buildings and strained student service budgets. They are also more likely to seek out counselors, experts said ...

... Raritan Valley Community College, which is located in a suburban swath of northern New Jersey, has welcomed a surge of young students. Many of those students would have attended a nearby four-year college in the past, administrators said, such as Rutgers University or Fairleigh Dickinson University.

Over the five years before 2011, Raritan Valley's total enrollment went up by 32 percent. But the number of students under 21 years old increased by 49 percent, from 2,472 to 3,675, while older students accounted for a much smaller portion of the growth. (See table here.) Full-time students are also gaining ground in the mix.

Casey Crabill, the college's president, said the college hasn't studied which four-year institutions students are passing up to come to Raritan Valley. They know, however, that more students are arriving from two wealthy counties ...

... The recession has played a big role in Raritan Valley's recent enrollment bump. “A lot of Wall Street lives in our counties," said Crabill, and many of those families suddenly had less money in 2008, making community college a more appealing option.

New Jersey's public universities have increased their tuition in response to state budget cuts, but they remain a cheaper option than most private colleges. The state has also seen a large population increase in the traditional college-age bracket, which means more competition for slots at public institutions, particularly at the increasingly selective flagship, Rutgers.

The competition is contributing to the growing number of young students at Raritan Valley, Crabill said. “It's like a wave." ...

... Older students are still a strong, visible population at Raritan Valley. Jill Marie Winters is one of them. She's in her fifties, and is working toward an associate degree in social work. Winters said she sees plenty of students like her on campus. But she likes going to class with young students, and interacting with them through Phi Theta Kappa, the honor society for students at two-year colleges.

“I just love the young kids," Winters said. “I think they like being around us."

Crabill said the college predicted its enrollment growth, but was surprised a bit by the numbers of students who are just out of high school. And while those students expect more campus life options, the increased energy has been a plus.

“Young students are demanding and that's what makes it fun," she said.

So, you can see that there is a viable alternative to the traditional four-year scenario. Community colleges also provide a platform from which to launch yourself into a four-year degree, should you desire to do so, by transferring into a more carefully selected school as you (hopefully) bring with you a more seasoned and mature outlook. Where there's a will, there's a way, and with CCs, where there's a need, there is a resource.