The tide of simple and cost-efficient college life is going out. Fast.

Remember Gordon Gekko? Remember his signature line from the movie Wall Street? "Greed is good!" Well, his affirmation has manifested itself in almost a thousand colleges throughout the land when it comes to forcing their students to conform to their procedure for accessing not only financial aid money but also other cash. The prime reason for this is the infamous bank card, or, as it's known in more common parlance, the debit card.

In a nutshell, what's happening is that colleges have signed agreements with banks (a.k.a. "integrated financial aid disbursement services"), most notably Higher One, and now channel financial aid funds to student through bank cards that, according to reliable sources, are loaded with fees, thus making plenty of money for the banks (sorry, I meant integrated financial aid disbursement services) and the colleges. As if the colleges haven't already stacked the deck hugely in their own favor against students and families. 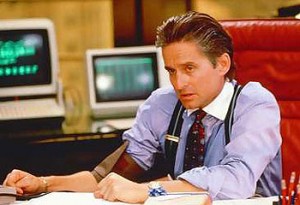 To get a better understanding of how this may affect your prospective or current college student (or yourself, if you happen to be a college student), check out this article, which explains the details of this somewhat overlooked consequence of today's college life. Here are some excerpted highlights followed by some apt comments from the College Confidential discussion forum.

A public interest group says as many as 900 colleges are pushing students into using payment cards that carry hefty costs, sometimes even to access students' financial aid money.

The U.S. Public Interest Research Group Higher Education Fund says in a report published Wednesday that colleges and banks often make secretive deals allowing them to rake in millions from the fees. The report says some of the fees appear to violate federal law.

The report says more than 9 million people, or two out of five U.S. higher-education students, attend schools that have deals with financial companies.

The fees add to the mountain of debt many higher-education students must take on. U.S. student debt tops $1 trillion, and has surpassed credit cards as the biggest source of unsecured debt. ...

... The fees add to the mountain of debt many students already take on to get a diploma. U.S. student debt tops $1 trillion, according to the Consumer Financial Protection Bureau.

Student loans have surpassed credit cards as the biggest source of unsecured debt in America, according to the CFPB, which regulates cards and private student lenders.

Among the fees charged by Higher One, according to its website, is a $50 "lack of documentation fee" for students who fail to submit certain paperwork. The U.S. Department of Education called the charging of such fees "unallowable" in guidance to financial aid officers issued last month. ...

... Among the fees charged to students who open Higher One accounts: $50 if an account is overdrawn for more than 45 days, $10 per month if the student stops using his account for six months, $29 to $38 for overdrawing an account with a recurring bill payment and 50 cents to use a PIN instead of a signature system at a retail store. ...

... Offerings by financial companies vary by campus. Some issue checking accounts with debit cards. Others offer prepaid debit cards, which are similar to bank debit cards but can carry higher fees and offer fewer consumer protections.

... Until recently, banks also made a lot more money from student loans. They extended federal aid to students, and also offered confusingly similar, higher-cost private loans alongside the government programs. Congress cut them out of the equation in 2010.

Neither change affected debit cards. As the recession forced states to slash higher education budgets, companies such as Higher One, Wells Fargo and US Bank approached colleges with an attractive proposition: The companies would assume the cost and hassle of handing out student aid funds, often paying for the privilege.

As noted above, here are a few comments from this discussion on College Confidential:

- Banks have been pushing these wherever they can: rebate debit cards from electronics sellers (I think that most consumers don't like them), the IRS using them for refunds (in many cases, fraudulant), and anywhere cash is distributed where the bank can get a fee.

Parents and students have to figure out the best solution in terms of fees, charges, fines vs convenience. It's a pain that your school is helping the bankers pick your pocket but everyone is doing that today. Except maybe your local credit union.

- You might look to see if there is a credit union in town - they are often in networks of credit unions where you can use ATMs at participating credit unions with no fees. Our son has an account at our local credit union which doesn't have many branches but his employer has a credit union (in his network) on-site (ATM + branch) where he can do transactions without fees.

- I remember when Boston College got their first ATM machine in McElroy. They had bank staff outside signing students up for accounts. It was BayBank and I already had an account with them so it was convenient for me. The good old days before fees when the justification for ATMs was that it would save the banks and customers money because tellers weren't needed. Now they are profit centers.

- I never took the time to read about those cards "from" the college, but I never trusted them. It seems that any card I didn't ask for that comes in the mail is an attempt to separate me from my money; I just kind of assumed this one was the same.

WRT choosing a bank, it looks like USAA Federal Savings Bank may be a good choice for those that are eligible. We're considering having our daughter do most of her banking with USAA, at least at the start. Students can deposit checks electronically (when they get them, which I suspect is infrequent); USAA doesn't charge for foreign ATMs and often refunds other banks' ATM fees, too.

If it becomes expedient to move to the bank on campus (which happens to be Capital One), she can do that, but I'd like her to give USAA a try.

- Instead of giving you a check, they give you a debit card which you can use to get cash from a machine (probably with a fee) or to pay for things at merchants that accept debit cards (like a grocery store).

- Check the credit unions that you are in the field of membership for. If they participate in the CUServiceCenter.com network (there may be other similar CU networks that I don't know about, so ask around) it is easy to find a "joint branch" where the host CU allows banking privileges to members of other participating CUs. If there is no "joint branch", there almost certainly are free cash machines available. For one of our CUs, the machines at most 7-elevens are free.

- What you CAN do, if it is federal aid is call your congressperson and senator, also send and email. Copy the finaid office.

If it is state aid, you can call your state rep, which is usually very effective, as they are remarkably responsive to their constituency and will take it up almost immediately, IME.

You can make sure the parents' association knows about this. I believe, at this point, under the law they MAY have to offer an alternative with no fees. I could be wrong, but I would look into that if I were someone in this position, personally.

Knowledge is power. Thus, now that you're aware of this practice, maybe you can take evasive action before your hard-earned dollars get sucked up by the Gordon Gekkos of higher education.