I've touched on this topic before, but the situation continues to get worse. Now, even the major mainstream media are becoming involved. Here's Lawrence T. Lesick, vice president for enrollment management at Ohio Northern University, quoted in no less a source than the May 14, 2012 New York Times: "We know the model is not sustainable. Schools are going to have to show the value proposition. Those that don’t aren’t going to be around." What he's talking about is the ceaseless escalation of college costs -- tuition, room, board, associated student fees, and (by implication) the increasing portion of "financial aid" that comprises student loans.

If you are a rising high school junior or the parent of a high schooler heading for a traditional four-year (if you're lucky enough to be able to graduate in four years) college education, then this is crucial information for you. There's an important article that addresses this issue. It's entitled ominously: These Are The Colleges That Will Be Screwed When The Student Loan Bubble Pops and is written by Larry Doyle. I bring it to your attention in order to, as they kept telling Cool Hand Luke, "get your mind right." 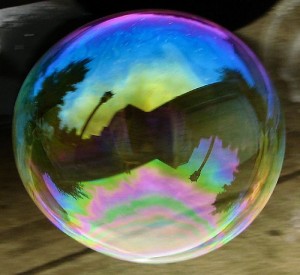 Pay attention, class! The financial future you preserve could be your own. Here are some highlights from Doyle's article:

Very few topics have received as much attention here at Sense on Cents as the student loan/debt bubble.

In my opinion, the size, scope, and impact of this problem is an enormous anchor weighing down our next generation and our nation’s economy.

Make no mistake, this anchor is not only impacting thousands of students and families but is also having an equally burdensome impact on colleges and universities nationwide.

I choose my words carefully here. The other day I entitled my commentary, Student Debt Bubble: Impending Doom for Colleges. . . .

. . . Embedded within a very recently released Bloomberg commentary is a study by Richard Kneedler, President Emeritus of Franklin & Marshall College. In light of the economic crisis that hit our shores and continues to envelop our nation, in early 2009 Kneedler released a very granular review of the economic condition of close to 700 private colleges and universities. For anybody with even a passing interest in this issue, Kneedler’s work, is a MUST read.  What do we learn? . . .

. . . With student debt burdens soaring ever higher. Demand for many of these at risk institutions will inevitably decline. Subsequently, these schools will get squeezed and be forced to close their doors. Kneedler highlights the gap that exists between the haves and have-nots. . . .

… there is a consistent, large financial gap between high capital and inadequate-capital institutions that is exacerbated in a time of financial trouble.

He provides a composite average profile of the at risk school.

. . . Students’ Aid Eligibility. Financially-at-risk students disproportionately enroll at financially-at-risk private colleges. 63 percent of our inadequate-capital institutions had student populations in which 25 percent or more of full-time undergraduates were eligible for financial assistance under Title IV of the Higher Education Act. By contrast, only 14 percent of adequate-capital institutions in the study did. Inadequate-capital private institutions play a critical role in giving low-income students access to college. This is a major national policy issue that our entire sector needs to continue to work hard to resolve. . . .

Inadequate-capital institutions are less prepared to absorb potential revenue losses from drops in enrollment, alumni giving, or investment income. They are less able to meet increased demands for financial aid for students or higher interest payments on variable rate debt. From whatever direction trouble arrives, these colleges may lack resources to weather the crisis, and their difficulties will tend to compound faster than will those of their better-off peers because they have less cash to spend, fewer assets to sell, and less budget “fat” to trim.

Inadequate capital institutions more often use bank credit lines, loans from trustees or vendors, and other arrangements vulnerable to cancellation or repricing to obtain capital and operational financing.

This discussion indicates that there is a significant subset of inadequate-capital private colleges and universities that provide essential access to higher education for low-income and minority students, access that could be denied if these institutions are damaged. In a time of severe economic challenges for the country, this access to higher education is an important national priority and needs to be considered as the country works it way through and out of the present crisis. . . .

I posted a thread about this article on the College Confidential discussion forum and there was a fast and furious response to Doyle's contentions. Here are some sample comments:

- I understand what the real estate housing bubble is, but what is exactly is the student loan bubble and why will/would it be disastrous if it pops and for whom? Aren't the colleges receiving the money from students and it's the STUDENTS and their families who are in trouble because they have already or already are paying their tuition, room and board through loans and now they must pay off the debts and not the colleges?

And about how long will it be until this bubble pops?

- The endowment numbers can be very deceiving because they don't take into account debt. There are many universities that have debt that is higher than their endowment, but few people pay attention to those numbers other than the bond rating agencies.

Yes, the colleges that are most vulnerable are the ones that charge too much money, are not highly ranked/prestigious, don't have a strong market niche in certain popular academic fields, are very tuition dependent and have high debt. These colleges are already greatly discounting their tuition for most students - some colleges already offer "merit" scholarships to almost every student they enroll.

Colleges located in areas with high cost of living also are more vulnerable. In addition to increasing the college's costs, the students also have much higher costs if they move off campus. Some of the worst debt horror stories were students who insisted on going to college in Manhattan.

The cost of housing greatly varies from college to college. Part of those costs are influenced by the newness of the college's housing and how elaborate it is.

- My dad flat out refused to pay for any school that would cost more than about $20,000 a year. The loans at a $60,000 a year university weren't worth it with grad school. I consider my self lucky because my mom is naive in this area and of I had a less intelligent dad, i would probably find myself attending Cornell this fall, taking on $120,000 in debt after graduating, which degree isn't really better where I'm going on a big scholarship to rensselaer. And graduating with no debt.

My classmates aren't so lucky or well planned. My 2 friends who are going to Harvard will be in about $90,000 in debt after graduating and another friend going to Williams will be in the same boat. Good thing my dad is a guidance counselor!

For some colleges, you can find summaries of the reports of their bond ratings on-line. The bond ratings look at current debt, percent admitted, and yield among accepted students, among other factors. The rating agencies want to see that the college has no trouble filling its class, and could expand enrollment if needed for financial reasons. The lower the bond rating, the higher the interest rate for borrowing by the college.

It would be very interesting to see the list of colleges with the lowest bond ratings. I haven't found it online. I'm guessing some of the colleges with the worst finances don't bother to have their debt rated - they probably just go to local banks for smaller loans at a time.

Some colleges seem to only charging sticker price to the rich kids who get in on a waiting list and to the international students. Everyone else gets at least a few thousand of merit or need aid from the college - which is called tuition discounting. I wonder if these colleges would be better off reducing their sticker price, because it scares off so many middle income applicants.

There are plenty more where those came from. Read Mr. Doyle's complete article then post your reactions either here or on the College Confidential discussion forum (or both!). This is a crisis that will not go away. Something's gotta give, and soon. What are your plans in dealing with it?