Are You A Helicopter Parent?

Or maybe you're a Humming Bird Parent. Either way, if you are, you have the distinct ability to hover over your child (or children), overseeing every small developmental detail. Your particular area of expertise is educational opportunities. Those skills emerge with special vigor during your offspring's later high school years, when the college process looms large.

The media are filled with rants about and defenses of helicopter parents. Here's just a sampling:

I have helicoptering tendencies. I like to think that awareness of the problem is part of its prevention, but when it comes to my children I have been known to remind, help, smooth the way, add my two cents and check-up on them more than a less enmeshed mother might consider absolutely necessary.

I try not to be as extreme as some (I can never imagine calling a college professor to discuss grades, or coming along on a job interview, as some parents have been known to do.) And as they get older I am purposely sitting on my hands, biting my tongue and reining myself in, because I understand that independence (theirs) is a muscle that needs exercise.

Even so, I can understand how parents can go from helpful to hovering. For years the message we're given is “the world is scary and complicated; your kids need you to navigate." Then one day (their 18th birthday? The day the leave for college?) we are told: “Time is up. Pencils down."

So I read with interest, and more than a little reassurance, an article in the Boston Globe yesterday defending helicopter parenting.

Beyond such undeniable excesses, a quiet reappraisal of helicopter parents is underway. Some researchers have begun to argue that late adolescence and young adulthood are such minefields today - emotional, social, sexual, logistical, psychological - that there are valid reasons for parents to remain deeply involved in their children's lives even after the kids are, technically speaking, adults.Moreover, they say, with the economy in a deep swoon, helicopter parents may have a vital role to play as career counselors or even as providers of financial aid to their offspring.

Aucoin goes on to redefine the terms we use to describe “involved" parents, drawing a distinction between over-parenting and helicopter parenting.

“Over-parenting," explains social historian Barbara Dafoe Whitehead, “is not letting our kids take the consequences of their actions, swooping down to rescue them, and the result would be a spoiled brat. But helicopter parenting is entirely different, and I think it is a positive style of child-rearing."

Aucoin also provides data to show that a parent's fingerprints on a child's life does not de facto cripple that child, citing the 2007 research of Jillian Kinzie, the associate director of Indiana University's Center for Postsecondary Research, which looked the effects of so-called helicopter parents on students at 750 colleges. Those students “were more engaged in learning and reported greater satisfaction with their colleges," Aucoin writes. Adds Kinzie: “They tended to have more interactions with the faculty, they tended to be involved in active learning, collaborative learning, more often than their peers." (But, he adds, their grades were slightly lower.)

Kinzie's first response to the data, she says, was: “This can't be right. We have to go back and look at this again."

Not everyone agrees with that sunny conclusion, though. Susan Newman, the author of “Nobody's Baby Now: Reinventing Your Adult Relationship With Your Mother and Father," told Aucoin that helicopter parents “do their children an extreme disservice."

“When parents are making decisions for their children all the time and protecting them, when they get out on their own they don't know a thing about disappointment," Newman says.

“I've seen a lot of these children who are parented in the helicopter manner who can't make a decision. They are calling home constantly: 'I don't get along with my roommate, what should I do? My roommate ate my food, what should I do'?"

Are you a helicopter parent? Are you wary of becoming one? And does any of this new thinking make you feel any better?

Fair warning, eh? Judy Fortin, on the other hand, issues a valid counterpoint:

Competition is tougher than ever this year to get into the freshman class at Georgia Tech in Atlanta. The admissions office received close to 10,000 applications for just 2,400 slots.

Every day, Director of Admissions Ingrid Hayes and her staff field calls from anxious parents wanting to know how their child stacks up.

"I know they want to give the extra nudge and we appreciate that," Hayes said, "but we really do want the students to take center stage in the process."

These over-involved moms and dads have come to be known as "helicopter parents." Hayes said they are a bigger part of the college admissions process than ever.

Clinical psychologist Mark Crawford explained the term comes from the concept of hovering. "They're always around their kids' life, kind of on the fringe, always making sure things go the way they need to go and not really allowing the kids to figure out solutions to problems on their own."

Crawford described well-meaning parents he's counseled who want the best for their child, but never want that child to fail.

"I see a lot of parents who hold their kid's hand across the high school graduation stage and think when they send them off to college all will be well," Crawford said. "They are not doing them a favor. They are actually doing them a disservice."

Crawford said children of "helicopter parents" may have trouble later when they're asked to take responsibility in the adult world. "They tend to blame others for bad outcomes that result from neglecting responsibilities or making poor choices," Crawford said.

Some turn out to be "perpetually anxious adults who take very few risks outside of their comfort zones," he said.

Georgia Tech Dean of Students John Stein often has to deal with the immediate effects on campus. "It's a rare day that I don't have at least one telephone call from a family member who is concerned about something going on with their son or daughter."

Times have changed from his days as an undergraduate, he observed. "My mom never called the college I attended. It's a very different world now. We've had to adapt."

Stein believes part of the problem is that college students are tethered to their parents via cell phones, e-mail and instant messaging. "They have made for a 24/7 kind of connection," Stein said.

In fact, a report from the National Survey of Student Engagement reported 86 percent of first-year college students were in frequent contact with their mother via phone or computer. And 71 percent of freshmen communicated frequently with their fathers.

"I see students struggle with this every day," Stein said. "You know, this is a life experience. It's the first time many students have to navigate daily life on their own."

Okay, mea culprit, as I always say. I've been guilty of hovering too. Since I have a son and a daughter who went through the college process loop some time ago, I guess you could have referred to me as a Chinook parent. 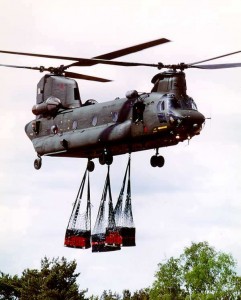 That is, I not only hovered but I also did perhaps more than my share of heavy lifting. But, hey, where do you draw the line between letting your kids make their own decisions at an untested and inexperienced young age and exerting your parental prerogative to help them make the right choices, based on their expressed and implied preferences? Huh? Face it. It's darn tough!

Anyway, weigh the pros and cons. You may even want to sample some other parental true confessions on the College Confidential discussion forum. If so, start here and then take a long hard look in the mirror.

Don't forget to check out all my admissions-related articles and book reviews at College Confidential.